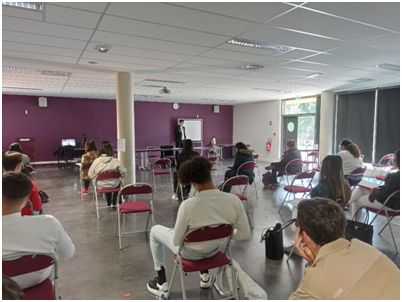 Michael D’Alimonte is a lawyer of 35 years old. It’s been 10 years since he started his career as a lawyer.

He works in 3 law offices, one in Montpellier, one in Sète and the last one is in Béziers.

To become a lawyer he went to a law school until he graduated with a master’s degree. He explained that during his first year of his master’s degree, he had to do an internship for 6 months. Then, he had to come back to his university for 6 months of class, where they had special lessons with a drama teacher who gave them defense speech/pleading lessons.

In his final year, he had to do an internship in a law office. We asked him what his opinion on the movie 12 Angry Men was. He told us that from his point of view, some points are accurate and some are not.

For example, he told us that from his point of view, one man cannot change the minds of the whole jury. And thus, the representation of Juror 8 in the movie is not realistic.

He also said that the fact that there are no women in the jury is realistic because the movie takes place in the 1950’s. Indeed, at this period of time, women were not allowed to be part of the jury during a trial. Currently, the lawyer says that there is as many women as men in the justice system nowadays and in all jobs.

However, the field requires a lot of time which leads women to stop earlier than men to focus on their family.

Then, he explained to us that as we saw in the movie, in the US you need unanimity for your verdict to be accepted, whereas in France you need only two third of the jury which represents 6/9 of it. In France, the jury selection is very different from the one in the US.

How are jurors selected in France ?

In France, each town has it’s own list of eligible people. They must be over 23 years old, they must know how to read and write and have the French nationality. They are also picked up according to where they live : if a person lives in Paris, they won’t be asked to come to Béziers to be a juror. Moreover, the jurors can be picked up even if they are already in the justice system except if they are cops, working in a penitentiary or if they are judges.

The lawyer’s is in favor of these jurors. He says that, according to studies, the results given by real judges and by « common » jurors are the same which do not question the accuracy of the verdict. Besides, he says that it is a good experience as a person to once be a juror in a trial.

Is the French justice system fair ?

According to him, he can’t really decide on whether or not, the system is fair. He says that he saw everything and anything and that in his opinion he would have sometimes taken different decisions from the ones that were taken. He adds that it is not the worst but also certainly not the best.

How to defend what’s undefendable ?

First, a lawyer can decide if he accepts a case or not which allows him not to take responsibilities into a case that he knows he won’t be able to be neutral in. Moreover, for him, if the accused has a coherent speech, he will take the case. He justifies his answer by saying that he will try to provide the fairest justice and adapted sentence.

Are medias influencing the justice system ?

Yes definitely. The press access and the multiple opinions spread on every platform can influence people’s minds. As a juror, you have to be able to take a step back to make your judgement as neutral as possible.

Finally, the last question that was asked was what case shocked him the most.

It was about a black widow who found someone else. She fell madly in love with that man, they had children… But one day, that man found his high school sweetheart on social media and decided to meet her to catch up on things. They fell back in love and the man decided to leave the widow to go back to his first love. However, the widow took it really badly and fell into a deep state of sadness and anger. Later, one of the kids suggested a way to kill the man, probably to avenge his mother, which they did. The man was killed.